Special COVID-19 Announcement: Recreation areas will be open for 2021 season. 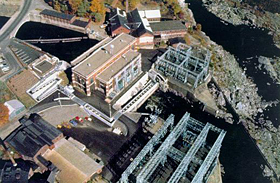 The Bellows Falls Project, FERC No. 1855, is located on the Connecticut River at river mile 173.7 and extends upstream approximately 26 miles. The dam and powerhouse is approximately 1 mile upstream of the Saxtons River and 3 miles downstream of the Williams River. 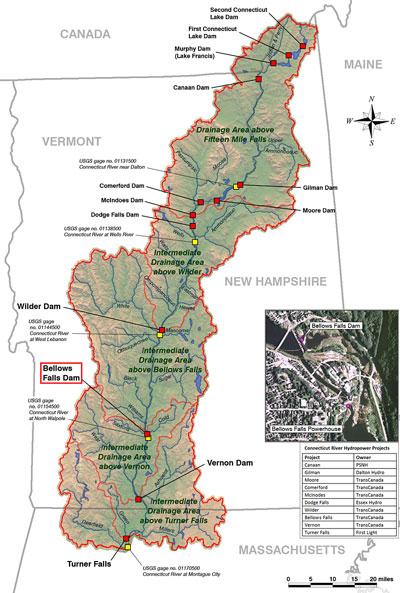 On October 5, 1978, FERC approved a settlement agreement concerning fish passage facilities for American shad and Atlantic salmon at the Project, and at two other projects - Wilder (Project No. 1892) upstream, and Vernon (Project No. 1904) downstream. The settlement was executed on December 30, 1977, among the Licensee, the States of Massachusetts, Connecticut, New Hampshire and Vermont, US Fish and Wildlife Service (FWS), and four non-governmental organizations (the Environmental Defense Fund, the Massachusetts Public Interest Research Group, Inc., For Land’s Sake, and Trout Unlimited). The settlement called for staged design, construction and operation of passage facilities at the three Projects, with Bellows Falls’ construction schedule being dependent upon a trigger number of 30 returning adult salmon to the downstream Holyoke Project (Project No. 2004). The upstream fish way was subsequently completed and commenced operation in 1984.

On July 26, 1990, the Licensee entered into a Memorandum of Agreement with the Connecticut River Atlantic Salmon Commission (CRASC) for permanent downstream fish passage facilities for the Wilder, Bellows Falls and Vernon Projects. A downstream fish diversion boom was installed in 1996, and passage is provided via the forebay sluiceway/skimmer gate, and by a supplemental sluice pipe.

On February 27, 1998, FERC approved the transfer of the license from New England Power Company to USGen New England, Inc. Under a multi-license amendment dated November 19, 1998, regional electrical transmission facilities were removed from the Project including three multi-wound step-up transformers. At that time, the station was automated and began operations via remote control from the Connecticut River Control Center in Wilder, Vermont.

On January 21, 2005 FERC Approved a change in the Bellows Falls Project Boundary, which removed a small piece of land with an office building (presently the TransCanada North Walpole office) from the Project. On January 24, 2005, FERC approved the transfer of the license to TransCanada Hydro Northeast Inc. On February 5, 2005, FERC approved another Project Boundary change, which removed 8.8 acres and historic structures from the Project boundary to facilitate subsequent transfer to the Bellows Falls Historical Society.